Read how the Scallop made an instant impact on Kristoffers life.

We had the pleasure in visiting Kristoffer at his school to try the Scallop. Kristoffer is a wheelchair user and finds it very difficult to sit on the floor. He relies on leaning forward in a rounded shape to keep himself balanced and finds it extremely difficult to do activities with his hands without falling backwards.

On our visit we played a game of catch with Kristoffer while he was sat on the floor without any aid. Kristoffer was unfortunately unable to play catch without falling backwards when he raised his arms to catch the ball.

"Can I take it home?"
Kristoffer

"Kristoffer is normally very nervous of new products. I'm suprised how well he instantly took to the Scallop."
Kristoffer's therapist

"Can I sit back in that seat?"
Kristoffer

We then offered the opportunity for Kristoffer to try and play the same game of catch while using a Scallop. Kristoffer sat in a size 3 and the results were fantastic! Kristoffer was not only able to catch the ball but also throw it back. Kristoffer sat in the Scallop comfortably and had a great time playing ball.

The Scallop offered Kristoffer the support he needed without preventing his ability to move while sat in the product. The Scallop gave Kristoffer, who is normally very nervous of new products, confidence to reach up and catch the ball without fear of falling backwards. Kristoffer was very vocal about his experience using the Scallop.

The Scallop provided Kristoffer the opportunity to play on the floor with confidence for the first time!

Dining with the Scallop

We later met Kristoffer's family, his mum, his sister Kirstine and his friend from school, Daniel. The whole family took the Scallops out for a test drive! They first visited a restaurant where for the first time Kristoffer was able to join his family at eye level around the table sat in a chair. This was a fantastic and emotional moment for both Kristoffer and his mum. For the first time Kristoffer was given the freedom and confidence to feed himself and join in with all the fun around the table. 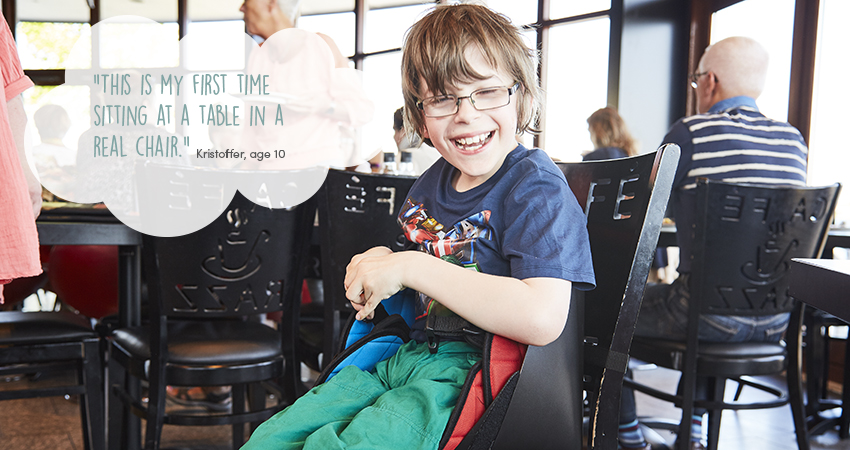 As the scallop is extreamely lightweight, it was easy for mum to pop the product over the handle bars of Kristoffer's wheelchair and move about easily. The family then embraced the sunshine and went to sit in the park for some ice-cream. The whole family was able to sit together in their own Scallop to relax and Kristoffer was able to play ball with Daniel and Kirstine with confidence.