R82 Scallop helps Evie being part of the fun

We had the great pleasure of meeting Evie Hopkins from Swansea, Wales, where the Scallop originally came from. Evie had been using the Scallop for 3 weeks, during this time Evie has used the Scallop in a variety of places and situations.
Evie’s mum, Karen, tells us all about their experience with the Scallop.

Evie’s diagnoses
“My daughter, Evie was diagnosed at four months old with cerebral palsy, spastic quadriplegia. Evie has total body involvement, with her right side being more affected. She is unable to sit independently and whilst this is a target for her, she flexes when her legs are crossed or when you take support away from her, when sitting. This results in Evie being unable to maintain position and she tips over to the side; which affects her confidence when trying to sit independently. It’s a vicious circle of lacking confidence/heightened anxiety – flexing/extension and tipping over.

Great strides
Evie has made great strides when one considers her starting point – her prognosis was that she will be unable to walk, communicate through a computerised aid, be fed through a tube and be unable to toilet/sit/walk …
Evie has achieved many of these feats; yet sitting independently has yet to be accomplished.

Being part of the fun
Evie’s communication skills are well developed and her desire to actively participate in all around her is high. Whilst we are able to facilitate some inclusion, Evie feels that she is unable to be fully included in many activities that are important to her, such as playing board games at the table, the PS4 (FIFA football) on the floor and small world play. Going for meals tends to involve Evie sitting on the end of a table due to limited room for manoeuvring her wheelchair.

Outdoor adventures
Although we live by many beautiful beaches and are a family who enjoy water sports and beach activities, we don’t tend to visit the beach as much as we used to or like to; because it’s a bit boring for Evie since most of the time an adult has to prop her between their legs. We are then unable to play with Evie to the degree that would be beneficial to her – building sandcastles, digging etc. The alternatives we have previously tried, such as sitting Evie on a child’s beach chair have resulted in Evie toppling over when she reaches to do something. 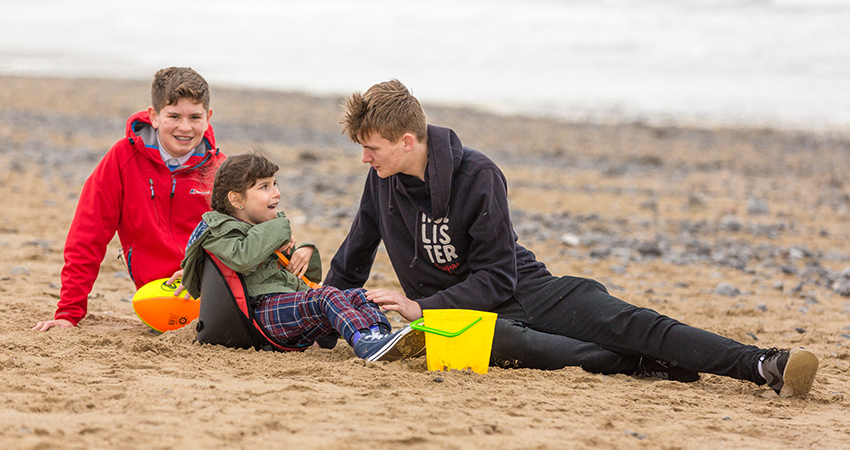 Scallop a life changer – FIFA has never been this fun
The introduction of the Scallop to facilitate Evie’s inclusion has been life changing for Evie. She is now able to actively participate in many activities which weren’t previously possible. She sits in the scallop on a normal chair at the table and plays board games, Playmobil small world, playdoh, colouring … with her brothers and sisters. Evie loves playing FIFA with her brothers and for the first time ever, she sits on the floor with confidence. Evie is able to concentrate on what she is doing rather than worrying and panicking about whether she is able to maintain position.

More engaged and at eyelevel with peers
Evie has used the Scallop in school and it is particularly useful during circle time and music. Previously, Evie would be sitting in her wheelchair or specialist seat (which looks like a baby’s highchair) and would be on a higher level than her peers, who would sit on the carpet. Now Evie is sat on the floor with her peers, playing instruments, talking … which makes her feel fully included. The school reported that Evie “Is more engaged”.

Party time
Evie is a popular child in her class and is invited to all birthday parties. Previously I have had to vet the venues for access and particularly the seating arrangements. Whether Evie is able to attend the party or not is based on my findings. Recently, Evie has been invited to two birthday parties, one at the cinema and one more traditional, at her friend’s home. Evie used the Scallop in both. The more limited room in her friend’s house was not an issue (previously, Evie wouldn’t have attended) since she sat at the table with her peers in her Scallop. Evie has been invited to cinema parties before and whilst she was able to attend; the seating for people with disabilities is in different areas, she would be sat away from the majority of her friends. Evie was able to sit in her Scallop in amongst her friends.

Eating out
The Scallop has been particularly useful when eating out. It is so lightweight that it is very portable and easy to take. In Restaurants, Evie’s wheelchair is too low for her to access the table, cutlery, food appropriately. The Scallop resolves this issue since Evie is able to sit in the Scallop in a normal chair, where she is at the correct height to eat.

Interacting as we’ve always wanted to
Taking Evie to the beach is now an absolute pleasure because I feel it is purposeful for her now. She is able to sit in the Scallop and we can sit in front of her, interacting as we’ve always wanted to, in the way in which we have been able to do with our other children – building sandcastles, knocking them down with pebbles, digging etc. is easy now since we don’t need to concentrate on supporting Evie in sitting.

Evie’s thoughts
Evie reports that she “Likes sitting up on her own!” (Without us physically supporting her) … “Because I can do it myself and don’t need you to do it for me!”
Evie’s favourite thing about the Scallop is “Sitting on the floor playing FIFA with Joseph and Ethan”.
Evie shares “I like taking my Scallop to school because I can sit close to my friends!”

It’s the small things
It’s the seemingly small things that make life easier for disabled children and their families. I think the Scallop fits into this category. It’s not expensive, it is lightweight and portable; meeting its targeted need excellently. We will definitely be taking it on holiday with us next year!” 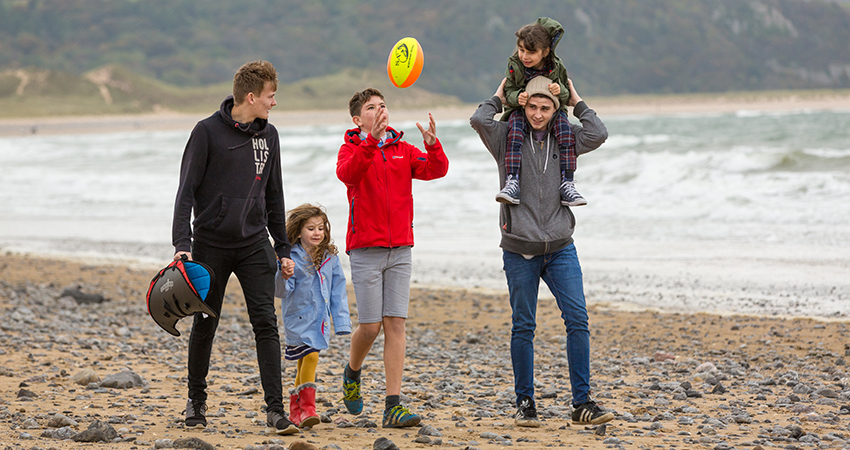