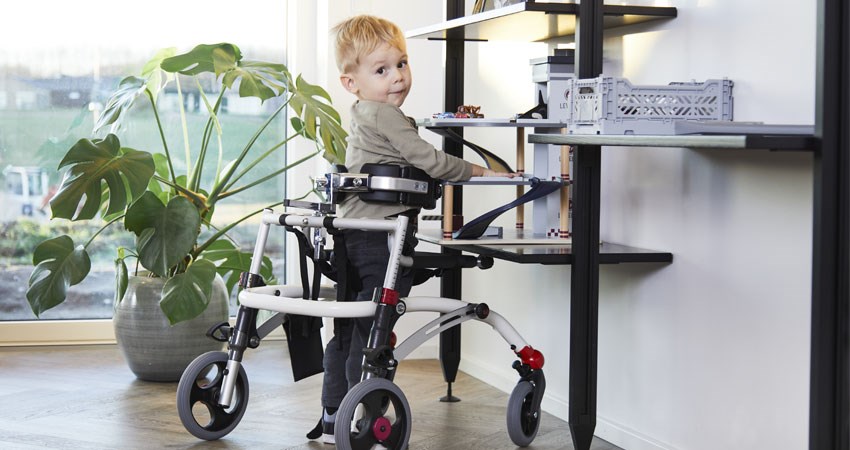 Close to Christmas we had the pleasure of meeting Tobias and his mom Isabella. Tobias lives with his parents in a small town close to R82’s facilities in Denmark. Tobias is almost 3 years old and loves to play with his Lego and help his dad with improvements in their house.

When Tobias was about 9 months old, he was diagnosed with Spinal muscular atrophy type 1. Until a few years ago that would mean that children with this type of diagnosis, would experience that their muscles would become weak and waste away within a few years, making the child unable to meet typical milestones, like holding their head or sit independent. However, a new type of medicine have changed what we know about the prognosis for this disease (SMA1). When Tobias started the medicine, he could only lie on his back and had difficulties stabilizing his head wile ling on his stomach. After a few treatments Tobias could sit independently and a few months later he started using a R82 Pony for walking. He continued his gross motor development and got stronger in his legs, making it possible for him to use a R82 Mustang instead. When we met Tobias, he was using the R82 Mustang with posterior support, chest support and a seat. We wanted to try if the Crocodile O could be the right solution for Tobias in his future development. 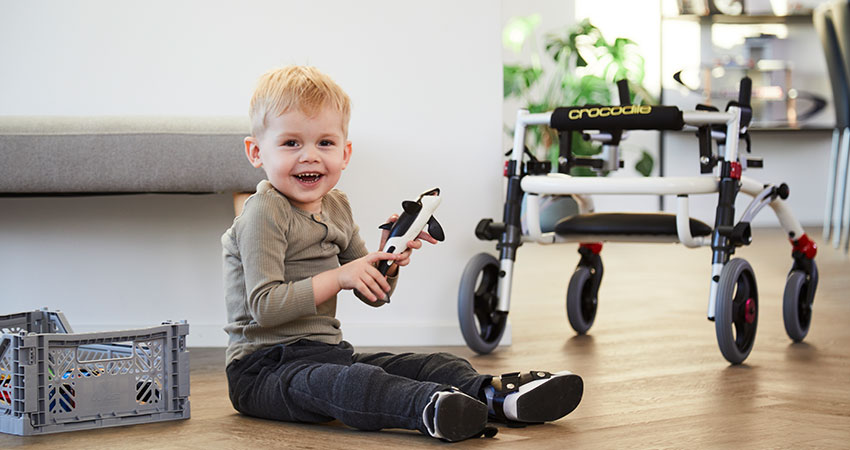 Tobias is able to stand for shorter periods of time but still needs support when walking. To accommodate these requirements, we made two different configurations for Tobias to try out. The first configuration includes sling seat, surrounding support and grip handle. This solution will aim to give Tobias support at the trunk and give him the possibility to take a rest when walking around. The other solution is with a flip down seat and forearm support with handgrip. This solution has less support and demands that Tobias can have full weightbearing for longer periods of time. In both solutions the directional stabilizer was locked to make it easier for Tobias to control the Crocodile. 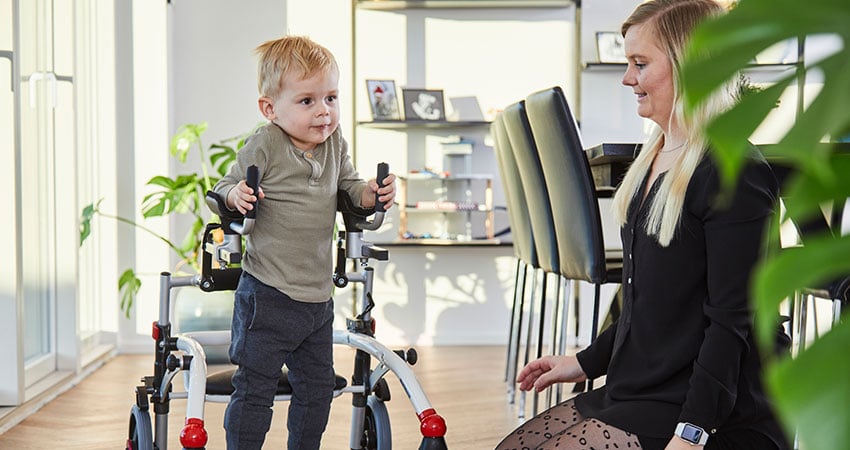 For now, the right solution for Tobias is still his R82 Mustang, which he uses on an everyday basis. He takes the Mustang to  the supermarket, where he helps his parents shop for groceries, he helps his father wash the car and inside he walks around in the whole house.

Besides the R82 Mustang, Tobias uses a R82 Toucan for standing and a R82 x:panda for seating. Furthermore he has also gotten a lycra suit that provides him with support and stability, which makes it easier for him to do different movements.

What is spinal muscular atrophy?

Spinal muscular atrophy (SMA) is a group of hereditary diseases that progressively destroys motor neurons. Because of this the child will experience muscle weakness and atrophy giving them troubles with activities such as sitting, walking, speaking, breathing, and swallowing. There is a wide range of impairment seen in SMA caused by defects in the SMN1 gene, from onset before birth with breathing difficulties at birth to mild weakness in adults. Accordingly, this most common form of SMA can be classified into four types, based on highest motor milestone achieved.

SMA type I, also called Werdnig-Hoffmann disease or infantile-onset SMA, is evident usually before 6 months of age. Symptoms of SMA type I include hypotonia (reduced muscle tone), diminished limb movements, lack of tendon reflexes, fasciculations, swallowing and feeding difficulties, and impaired breathing. These children also develop scoliosis (curvature of the spine) or other skeletal abnormalities as they get older. Without any treatment, affected children never sit or stand and the vast majority usually die of respiratory failure before the age of 2 years. Children with SMA type I now live longer and can reach higher motor milestones like sitting and even walking with more proactive clinical care and newly available disease modifying treatment.

The Mustang is a walking aid for disabled children and youngsters, who need supplementary assistance with their daily walking.

The Toucan standing frame comes with soft curves and smart colours. It is designed to support the user in the upright and prone position.

The x:panda is a multi-adjustable dynamic seat, developed to establish an ideal seating position for children and youngsters living with a disability.