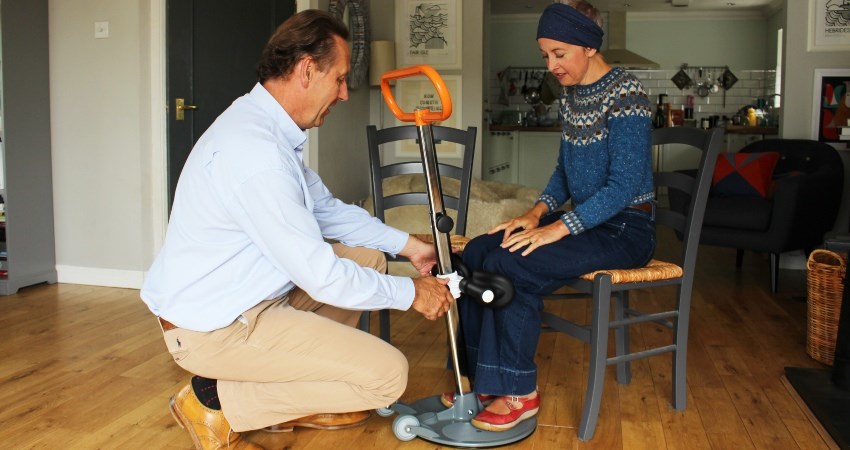 Handywoman – rehabilitating after a stroke

Through the initial rehabilitative qualities of the Etac Turner sit-to-stand aid, Kate Davies has built a thriving knitwear business and publishing company after a stroke at the age of 36.

In Kate's published book, Handywoman, she takes us through her own journey from a sudden collapse on the roadside, to the experience of stroke rehabilitation and learning to regain quality of life. Part memoir, part personal celebration of the power of making, in the book Kate reclaims disability as in itself a form of practical creativity.

As an academic with a PhD in literature, Kate was a lecturer at Newcastle University until 2010. She was enjoying a fully active and healthy lifestyle in Edinburgh until experiencing a major stroke during her early morning commute via Waverley station. Unable to move on the roadside, she was luckily discovered by a passing GP who immediately organised for an ambulance to transfer her to the Western General Hospital.

After tests and a MRI scan Kate was diagnosed with having two strokes caused by the combination of blood clots and an unbeknown hole in her heart. Kate subsequently underwent surgery to successfully resolve her heart condition however brain injury had resulted in paralysis down the left side of her body, speech and co-ordination issues. Kate spent four weeks in hospital and two months as an outpatient undergoing specialist rehabilitation which is when she encountered the Etac Turner stand aid. The assistive device was instrumental in Kate’s initial rehabilitation and combined with her determined attitude, delivered the foundations for a more positive recovery.

The Turner became an essential part of Kate’s daily routine during the first 12 weeks of her recovery and greatly helped her regain muscle co-ordination in her left side. Kate explains: “If you suddenly become disabled you do not know how to move your body around or how anybody else is going to move you. If you are in a hospital context you are moved around by many different people and they may not know how you prefer to be assisted. As I have a small frame, I would be regularly manhandled from one position to another – I was not comfortable with this. I fully appreciate NHS staff were helping me in a professional manner so I did not want to keep saying ‘please don’t handle me like this’. This is where the semi-independency provided by the Etac Turner was massive – it offered a noncontact way of transferring me. With my interest in design, I was blown away by this piece of equipment the first time I used it to complete a standing transfer. Suddenly I had access to a beautiful ergonomic product that could be used practically and would simultaneously help with my recovery.” 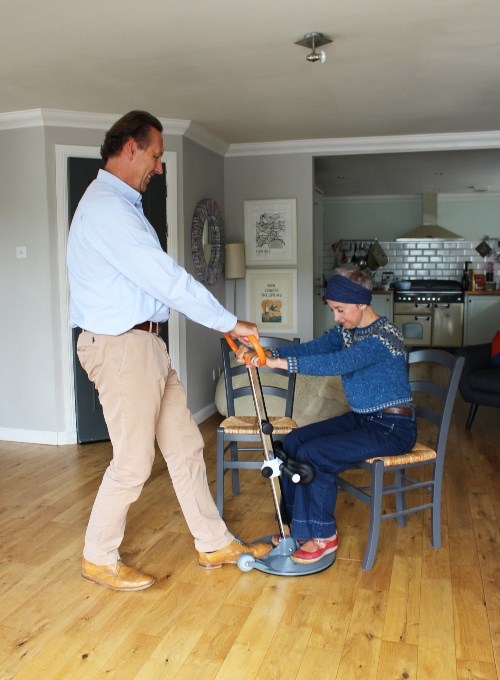 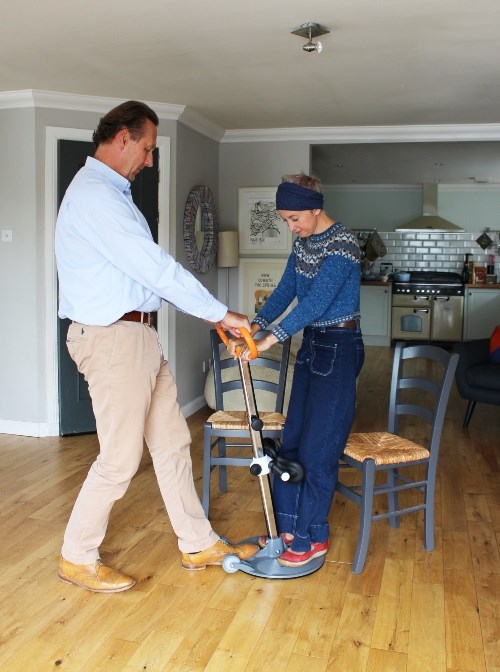 Kate continues: “The Etac Turner helped me regain strength as I trained the undamaged part of my brain to operate my left side. Within two-to-three weeks after my stroke I had developed limited movement in my left hand and was able to pull myself up to a standing position with the Turner. It is an incredible device that motivates you to move and through a counter balanced operation, there is no contact between user and assistant, hence you feel more self-determined and embodied. I would use it several times a day with the assistance of a nurse or physiotherapist, it was fantastic. I even became quite possessive of the Turner as it was so essential to my development and positivity. When it was taken to another hospital department I would say ‘where’s my Turner!’” “Every standing transfer would make my body stronger particularly my back and halted the possibility of muscles wasting away. As it facilitated essential daily tasks, it delivered physiotherapy without the need for specific sessions and instructions. You have to keep mobile, it is so important not just for physical strength and co-ordination, but for better breathing digestion and circulation. Being in a sedentary state is not positive, even just reaching out for the product in the early stages was therapeutic.”

Kate concludes: “When I had little movement, there wasn’t another piece of equipment that helped me more than the Etac Turner. It has clearly been designed by a talented team who understand the possible limitations of the body yet also consider the future potential of users.” Now eight years on from experiencing a stroke, Kate has achieved a remarkable recovery with mobility and strength in her left side. She decided not to return to lecturing due to the physically demanding nature of the role and instead has established a successful knitwear business and publishing company. KDD (Kate Davies Designs) started as a source for downloadable knitting patterns which were created and managed by Kate. Knitting was a key activity for Kate’s physical and mental rehabilitation as it assisted with regaining fine motor skills and sophisticated co-ordination.

Today Kate regularly works with museums and heritage organisations and has contributed to BBC TV and radio programmes. In terms of her publishing, Kate has just launched her latest book ‘Handywoman’ which is a unique piece focusing on how disability can change attitudes to life in a positive way. The Etac Turner and how it was vital to Kate’s rehabilitation is highlighted within the book. In this series of engaging essays Kate describes how brain injury has allowed her to build a new kind of ‘handmade life’ and celebrate the ‘power of making’.

Etac Turner PRO is a world-class turn aid with a functional design that offers safe patient turning with standing support. Manufactured and designed by Scandinavian assistive product specialists Etac, The ergonomic product encourages natural standing and sitting movement for semi-ambulant users and reduces the risk of injury for the assistant. It supports active transfers from sitting to standing with stable rotation manually implemented by a carer. With its balanced design, standing transfers from seats, beds, toilets and wheelchairs are safer and encourage mobility for users with restricted movement.