In this heart-warming case story, we meet Mr and Mrs T, an affectionate couple that have been together since they met in 1944. Their tale is one of independence, resilience, and unwavering support for one another through the trials of ageing – even to a point where it presented their carers with some serious challenges.

Through thick and thin

Having no children, Mr and Mrs T dedicated themselves fully to one another and shared a relatively private life together. Accustomed to caring for themselves, the couple mostly declined support from professionals and asserted their independence well into their golden years. By age 96, Mrs T’s health had deteriorated. Mr T was adamant about tending to his darling, as he would often refer to her, but finally started allowing help from professionals every now and then.

With diagnoses of advanced dementia, recurring urinary tract infections, decreased mobility, and a suspected stroke with one side weakness, Mrs T was unfortunately in bad shape and needed plenty of support. A history of falls complicated matters further, and Mr T had to call in the occupational therapy team more often to help him get Mrs T back into bed after she had fallen from it at night.

Mrs T, still physically strong yet cognitively declining, was very restless in bed during the night time, and a solution had to be found to prevent more falls and further injury. Mr T rejected using a bed sensor with carer alert, insisting instead on spending the nights next to Mrs T, holding her hand. Waking night professionals were not seen as an option but rather as an invasion of privacy. Mesh side rails were considered by the OT team but deemed inappropriate as the rails could potentially increase the risk of injury and entrapment.

A crash mat was placed next to Mrs T’s bed, but at night Mr T insisted on moving the mat so that he could place his chair, table, and stool by the bed to sleep next to Mrs T whilst holding her hand.

There was no doubt that Mr T cared for his wife and wanted to take care of her the best way he knew. However, his resistance to professional advice, unfortunately, put both himself and his wife at the risk of harm and injury. No initiative made this clearer than his decision to tie Mrs T to the bed to keep her from falling off when he had to leave the room.

His desire to be close to his beloved wife and care for her, honourable and touching as it may be, was becoming a concern for the carers. Finally, after continuous visits from the OT team had built a level of trust and so many proposed initiatives had failed, a promising solution was presented – Etac LeanOnMe cushions. 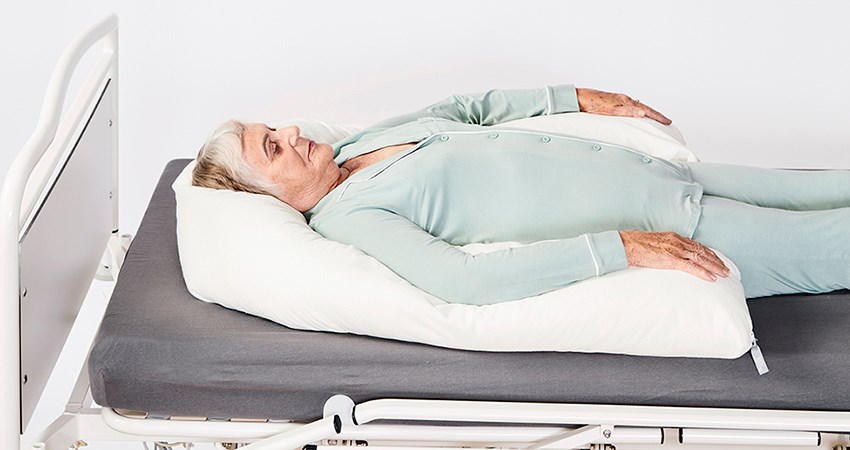 Mrs T was previously often lifting her leg and off the bed, but once the cushions were in place, she relaxed into them, and her fidgeting was reduced. The cushions decreased the risk of Mrs T falling from the bed, but they also remarkably reduced her agitation by providing sensory stimulation and tactile input. What’s more, an impressed Mr T not only accepted the cushions but found a new way to be there for his wife by ensuring that the cushions were in the correct position each night and that his darling was comfortable.

The remainder of her nights were spent sleeping peacefully, as Mrs T did not fall once since the LeanOnMe cushions were put in place. As for Mr T, he was able to move his chair up to his wife’s bed to sleep next to her, holding her hand through the night without putting her or himself at risk of injury.

A complicated situation was finally resolved after many interventions had failed, enabling Mr and Mrs T to remain at home together and sleep side by side.

This story is based on a study that was a joint work between Kirsten Callander, Senior OT from the Reigate and Banstead Adult Social Care Team in Surrey County Council and Mahesh Shenoy, Area Sales Manager and Immedia Business Development Etac UK.

If you want to read the complete Case study, find the document here.

Related imagery does not depict our case subjects, Mr and Mrs T.