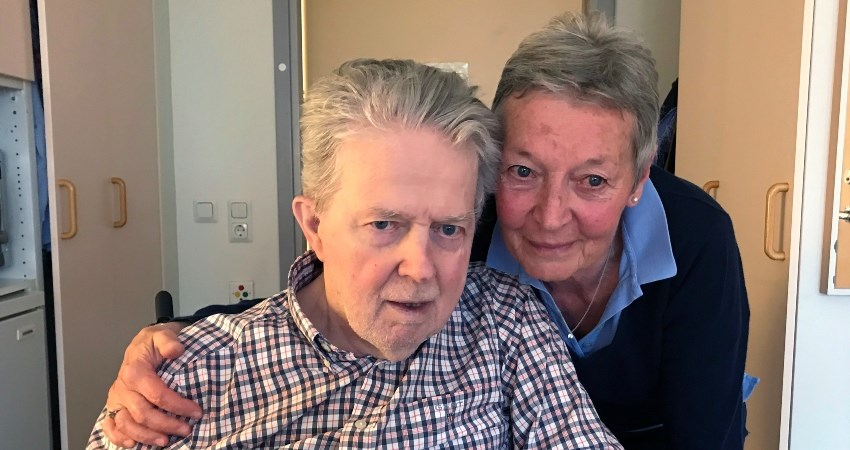 Being independent and able to remain active

Runar has always been a very active person, but Parkinson’s disease has caused him to have balance issues and difficulty initiating movement. Despite trying several wheelchairs, Runar hadn’t found a wheelchair that could provide the support he requires while allowing him to position himself correctly so that he can propel it independently. Four months ago, Runar was finally able to start using an Etac Prio wheelchair, and it has been a perfect solution for him.

Runar was born and raised in Ångermanland in the north of Sweden. As a teenager, he worked aboard cargo ships shipping timber along the Swedish coastline. Through his love of dancing, Runar met his wife Inger, and together they raised a family and had a happy life together in Eskilstuna. 25 years ago, Runar was diagnosed with Parkinson’s disease. The illness can cause tremors, lack of facial expression, balance issues, and difficulty initiating movement. For Runar, it began with back pain and resulted mainly in difficulty initiating movement and reduced balance. Runar has experienced balance problems since the onset of his Parkinson’s and he has fallen several times, both indoors, in the bathroom, and outdoors, while bicycling. But Runar has always had an active lifestyle and enjoyed being outdoors, and he has not allowed his falls to slow him down or limit what he chooses to do.

When their villa became to inhibitive for Runar’s physical independence, Runar and Inger moved to an apartment. During the ten years they lived in their apartment, Runar became increasingly dependent on his wife. During this time he started to use a personal alarm in case he fell when Inger was not at home. Following a fall in the shower when Runar was not able to use his alarm to call for help, the couple decided to move Runar into a nursing home. The couple now lives in Stockholm where Runar lives in a good retirement home near his child and grandchildren, and with Inger, only a short walk away.

The walls in Runar’s room are covered in pictures from his grandchildren, and photos of Runar and Inger together. There is always a bowl of candy on the table, and he won’t give up until everyone has had a taste. Runar still loves to dance, and immediately wants to jump out of his wheelchair when he hears his favourite music. He even dances in his wheelchair, preferably while holding Inger’s hand. He is quite mobile and jogs down the hallways with his occupational therapist Anna, using a walker.

"It feels great seeing Runar in his new wheelchair. He has always been so active, so it means a lot that he is able to propel the wheelchair himself. Everybody should get to be as independent as they can be." Inger Bodén, Runar's wife

With the Etac Prio 3D-back, Runar gets better support of the back. This allows Runar to propel the wheelchair himself, which contributes to increased independence.

Runar’s challenges today include initiating an activity or a movement. It helps if someone encourages him to start by counting him in or by using music and helping him to feel the beat. Runar also leans to the left in his upper body and therefore requires good support for both his back and torso, and his arms and feet. Even if Runar can walk short distances with his walker and an assistant indoors, he is still dependent on a wheelchair to get around the retirement home. Runar really wants to have some independence. He needs a wheelchair that is easy to manoeuvre so that he can propel it himself.

In his old wheelchair, Runar wasn’t able to push into the back rest properly and he couldn’t reach the rear wheels properly. Runar wanted to be able to use his feet to foot propel, so he didn’t have any foot rests, but when he tried to do it, his feet dragged or got caught against the floor. Since Runar continuously slid forward in the seat, he didn’t get enough support for his back and trunk to be able to sit up and do the things he wanted to do, like propel his own wheelchair. According to his OT Anna, “Runar has to focus all of his physical effort just to remain in a good seating position in the chair.”

The solution – Runar gets an Etac Prio

After seeing the Etac Prio wheelchair on Etac’s website, Runar’s occupational therapist Anna thought it would be a great fit for him. But due to procurement administration etc, Runar was initially required to use another wheelchair from the regular selection. When Runar was unable to drive that wheelchair, Anna applied for an exception and this time it was approved.
Runar has now had his Etac Prio for four months. The biggest difference for Runar has been that he is able to position himself correctly and come back into the backrest properly so that a larger portion of his back is supported. Since his back is better positioned, his weight is also better centered over the wheels, making the wheelchair easier to manoeuvre. Runar is now able to reach the hand rims and can propel short distances independently and this is a huge difference compared to other wheelchairs he has tested. On his bad days, a tray table helps him to support himself better while seated and he can prop himself for improved proximal stability.

"It was a really long road to get Runar into a Prio. I knew all along that it would be the right fit for him, and I’m so glad to see the difference it has made in his life."  Anna Eriksson, Occupational Therapist, Attendo